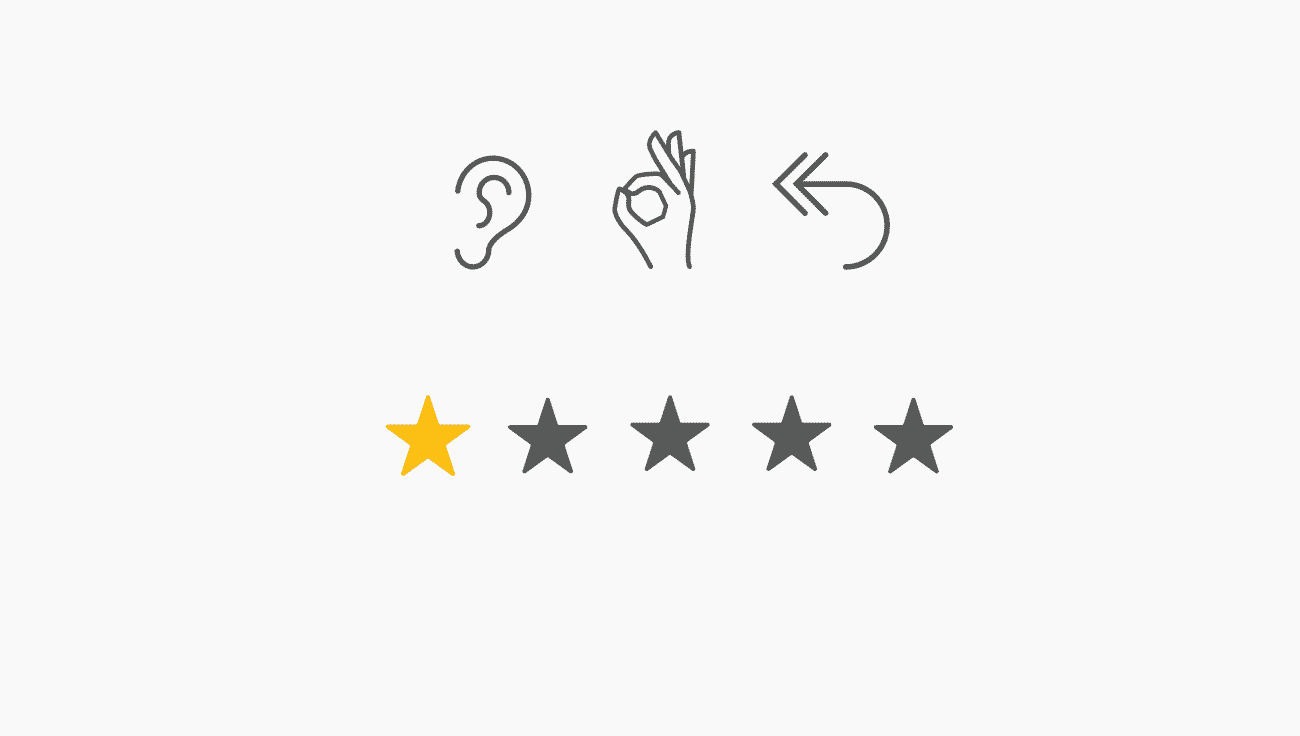 How to Respond to a 1-Star Review on Google

Online reviews are essential for building a successful brand. If you look at the numbers:

Digital trust has tangible value. We rely heavily on Google to browse, vet, and buy. So, what happens if we get a 1-star review? While one bad review won’t sink the business, ignoring it only lets water accumulate, and one day you’ll be drowning.

How to Remove and Respond to Negative Reviews

In some cases, you can remove reviews. Google has different content categories that allow you to flag and remove reviews, these include terrorist, sexually explicit, off-topic, spam, or dangerous content. If it falls under these or other Google Prohibited and Restricted content categories, you can submit a ticket to Google My Business and it will be removed (typically) within five days. However, if it’s a legitimate review, you’ll need to address it.

When responding to 1-star reviews, we need to do three things: listen, empathize, and respond.

Sometimes people will just leave a blank 1-star response. If this happens you still need to reach out to ask what happened. Here are a few examples of how companies have handled 1-star Google reviews:

In each of these cases, the companies listened, identified the problem, and addressed the situation, sometimes even offering refunds.

How to Mitigate and Leverage Negative Google Reviews

If we’re truly listening, negative reviews are our customers telling us how we can do better. After you’ve responded to the negative review, the next step is to keep the problem from happening again—own the issue and find the hole in the ship.

Say a hypothetical restaurant gets a 1-star google review claiming “My server was the worst I’ve ever had”. Who is at fault? At first glance, the server, but maybe that particular day the restaurant was over capacity and servers were working twice as many tables. Was it the server’s fault or the manager’s for not efficiently enforcing a wait time? Or does the blame lay on the general manager for not properly hiring and training? Whatever the reason, the hole needs patching.

Doing investigative work to determine the reality is essential. Otherwise, our actions will only add momentum to the pendulum of negative reviews, constantly swinging back and forth propelled by hasty actions like “firing the server.”  That said, course correcting is difficult.

Are All Negative Reviews “Bad”?

As it turns out, negative reviews aren’t all bad. Researchers at Northwestern University found that, when in moderation, negative reviews increase sales. If you’re searching for a restaurant and you find two, one with 10,000 perfect reviews and one with 1,000 great reviews with a handful of negative ones, which would you go to?

Pleasing everyone 100% of the time is impossible. Negative reviews are inevitable. What really matters is if we’re responding to them and being proactive. In another study, “45% of consumers [said] they’re more likely to visit a business that responds to negative reviews” than one that doesn’t.

Being proactive about negative reviews can be tremendously powerful and put us ten steps ahead of the competition.

How to Create a System to Generate Positive Reviews

Once you’ve patched the hole it’s time to bounce back. Creating a system for acquiring positive reviews isn’t rocket science and once your system is in place and fully automated, you won’t have to worry about it.

There are three steps to acquiring and nurturing positive reviews:

Most people trip up on the last part—asking. It can be uncomfortable, but when you look at the impact, it’s worth it.

To give a personal example, Smile Direct Club is killing it in the Google review game. I recently scheduled an appointment with them a couple months when looking at different clear aligners. I got there, they scanned my teeth to create a potential aligner mold, showed me projected before and after pictures, and gave me a baggy with lip balm and teeth whitener—all for free. Then at the end of the appointment, they asked me to leave a review if I had a good experience.

They’ve been using this system for the past two years and in that time their North Austin location is sitting at 328 reviews, averaging 4.7 stars. That’s a new positive review every 2-3 days.

If you’re not a brick and mortar, you can also email, text, and use landing pages to ask customers for reviews. This process is simple, but often overlooked. Don’t miss making the impact—offer value, build trust, and ask for the reviews!

Pretending you’re invincible and ignoring negative reviews is like the Titanic claiming it’s an unsinkable ship. Sure, maybe you’ll be able to run into a couple of small icebergs and stay the course, but hit a big one, and you’ll be shipwrecked for sure.

So, remember: nurture positive reviews, respond to negative reviews, build great products/services, and reap the reward. If you need help with building your review strategy or elevating your online presence, let’s start a conversation.

Leading with Empathy: Tips for Unifying Teams and Nurturing Leads

MODcast Episode 3 – Crafting a Narrative with Martech with Annalisa Church